Football madness will enter my home in approximately 7 days. As a lifelong San Francisco 49ers fan, I am pumped to throw a Super Bowl Party – vegan style of course!

Just because it is vegan, does not mean you take out all of the tasty fun! I’ve been trying to decide the menu and thought I would share some ideas and resources I found.

I'm leaning towards making a big pot of chili and setting out my mason jars with a tray full of toppings like daiya cheese, vegan sour cream, olives, onions, crackers, etc. as a "Chili Bar" With some munchies and sweets on the side, I think this sounds simple enough to prepare in advance without a lot of day of energy.

Other Simple Ideas for Snacks

Croissants
Yes… those original Pillsbury treats are *gasp* vegan! You can roll anything up in these tasty babies… chocolate chips are my favorite of course, or add a little jam and make them jelly rolls. Get creative!

Veggie Tray & Hummus
This has been a staple at my weekly football parties, I guarantee it makes everyone smile.

Since it is not quite Super Bowl Sunday, I have not tested out every one of these recipes. However, I thought I would include some links for vegan or easily veganized football foods!

Football Themed Dessert Dip!
Crazy For Crust has a fun recipe you can make dairy free, using some vegan cream cheese and Earth Balance instead of butter.
http://www.crazyforcrust.com/2012/02/peanut-butter-football-dip/

Southwest Rolls
Emily Bites has a great recipe that can easily be changed up to use won ton wrappers or tortillas instead of eggrolls!
http://www.emilybites.com/2012/06/southwestern-egg-rolls.html

The Mercy for Animals Blog has some fun Super Bowl suggestions and links as well!
http://www.mfablog.org/2012/02/kick-off-your-super-bowl-party-vegan-style.html

This is another great list of Super Bowl Party food!
http://vegnews.com/articles/page.do?pageId=4139&catId=2
Posted by Unknown at 2:32 AM 1 comment: 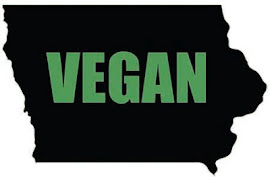 “The vast majority, perhaps 80-90% of all cancers, cardiovascular diseases and other forms of degenerative illness can be prevented, at least until very old age, simply by adopting a plant-based diet." Professor T. Colin Campbell, Ph.D., Author of the China Study

Start small with just one or two days a week with a plant based diet and you can make a difference in your own health. Go all the way and your whole life will change. You deserve to be healthy. Take care of yourself.